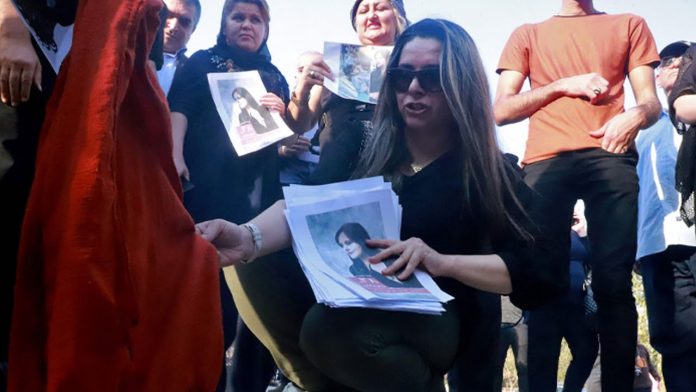 “Today we stand with the brave citizens and brave women of Iran who are now demonstrating to secure their basic rights,” Biden told the General Assembly.
Public outrage has erupted in the Islamic Republic since authorities announced on Friday the killing of 22-year-old Mohassa Amini, who was detained for allegedly “inappropriately” wearing a headscarf.

Activists said the woman, whose Kurdish first name is Gina, was fatally hit in the head, a claim denied by officials who announced an investigation.

Iranian President Ebrahim Raisi addresses the 77th session of the United Nations General Assembly
Video footage circulating on social media showed some of the female protesters defiantly removing their headscarves and burning them in a fire or symbolically cutting their hair before cheering crowds.
“No to the veil, no to the turban, yes to freedom and equality!” Demonstrators in Tehran were heard chanting at a rally echoed by solidarity protests abroad.

As protests filled cities, especially in northern Iran, for the fifth consecutive day on Wednesday, internet services were severely disrupted across the country, limiting the ability to share via social media.
In southern Iran, video footage allegedly taken on Wednesday showed protesters setting fire to a giant photo on the side of the building of General Qassem Soleimani, the Revolutionary Guards commander who was killed in a US raid in Iraq in 2020.

Iranian citizens in the capital, Tehran, on September 21, 2022
Iranian state media reported that street rallies spread to 15 cities, with police using tear gas and arrests to disperse crowds of up to 1,000 people.

Amnesty International said it had recorded the killing of eight people – six men, a woman and a child – four of whom were shot by security forces at point-blank range.
The London-based rights group decried the United Nations for giving Raisi a platform, saying it showed the international community’s “repeated failure” to ensure accountability.

Activist Azam Jangroi, who fled Iran after being arrested for taking off her hijab during the 2018 protests, echoed these criticisms.
“Why does the UN normalize Iran’s misogyny?” asked Gangravi, who has settled in Canada and participated in the solidarity protests in Toronto.

“Why should a misogynist country like the Taliban have a seat at the United Nations?”
– ‘Double standards’ –
In his speech to the United Nations, Raisi referred to the killings of Indigenous women in Canada as well as Israeli actions in the Palestinian territories and the “brutality” of Islamic State against women from religious minorities.

This image taken from a video made available on the ESN platform shows protesters dropping a flagpole in Saqqaz city in Iran’s Kurdistan region on September 19, 2022.
“As long as we have these double standards, where attention is only focused on one side and not everyone is equal, we will not have real justice and equity,” Raisi said.

He also rejected Western conditions for reviving the 2015 nuclear deal, insisting that Iran “does not seek to build or acquire nuclear weapons and these weapons have no place in our faith.”
British Foreign Secretary James Cleverly said that “the Iranian leadership should note that people are not satisfied with the direction they have taken”.

They can abandon their aspirations to acquire nuclear weapons. They can stop the suppression of voices inside their country. “They can stop their destabilizing activities,” he told AFP at the United Nations.

“A different path is possible. This is the path we want Iran to take and this is the path in which it will see them with a stronger economy, a happier society and a more active role in the international community.”

French President Emmanuel Macron said he asked Raisi at Tuesday’s meeting to show “respect for women’s rights”.
The protests are among the most serious in Iran since the November 2019 unrest over high fuel prices.

Iranian expert David Rigolet Rose of the French Institute for International and Strategic Affairs said the wave of unrest over Amini’s death was “a very big shock, it is a societal crisis”.
Demonstrations first erupted on Friday in Amini’s home province of Kurdistan, where Governor Ismail Zari Kosha said on Tuesday that three people had been killed in an “enemy plot”.

A photo obtained by AFP outside Iran shows protesters gathering around a burning barrier during a demonstration in Tehran on September 19, 2022.
On Wednesday, Kurdistan Police Chief Ali Azadi announced the death of another person, according to the Tasnim news agency.

Fars news agency quoted the regional prosecutor, Shahram Karami, as saying that other protesters were “killed during the riots” in Kermanshah province, blaming “counter-revolutionary agents”.

Cherub - October 1, 2022 0
The term health care is frequently repeated, and is often associated with eating healthy food and avoiding smoking, but the concept of health care...

Cherub - October 1, 2022 0
The term health care is frequently repeated, and is often associated with eating healthy food and avoiding smoking, but the concept of health care...

Cherub - October 1, 2022 0
The term health care is frequently repeated, and is often associated with eating healthy food and avoiding smoking, but the concept of health care...
Sports

Cherub - October 1, 2022 0
The European Union plans to cut energy use by "at least five percent" during peak hours, according to a commission document seen by AFP. Brussels...
Business

Cherub - October 1, 2022 0
A woman holds a torch during a demonstration against rising energy prices and the increasing cost of living during a national demonstration in Brussels...

Casper Ruud in the US Open final after his victory over...

ABOUT US
Fbtestify is a mission-led, impactful media platform focused on uplifting content on news about the planet and the world.
FOLLOW US
© Copyright 2022, All Rights Reserved Fbtestify.com